How does Solar Energy Help the Environment?

When it comes to Solar Energy a lot of people have different opinions and perspectives about it, but one thing is for sure; it helps the environment because it generates energy from the sun without burning any kind of fossil fuel or coal, this being said, Solar Energy Panels do not emit any kind of greenhouse gas emissions that damage our ecosystem and health.

By going solar in your home, you are directly improving the environment for your family and neighbors. When a homeowner makes the switch to solar, your system can reduce your carbon footprint significantly, with an average impact equivalent to: 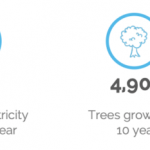 People tend to say that going Solar might be expensive to install or maintain, but surprise, surprise; everyday Solar Panels are getting cheaper and the best part of that is that you save money from your monthly energy bills. Most importantly, if you install Solar Panels in your home or business the value of the building increases due to having a Clean Energy Source.

Sure, all the money saving sounds great, but something is more important than that. Solar energy also helps the environment where your family, kids, and love live. 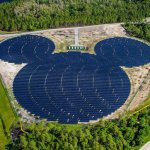 Famous for their various theme parks, Disney themselves are involved in the use of Solar Energy, but that’s nothing new for them. According to their Environmental Integration Director, Angie Renner, Disney has been using Solar Energy since the 80s.

Today, Disney owns a 270-acre Solar Farm in Florida that generates 50MW providing 25% of the power used in Disney World, it might not sound like a lot, but it is actually enough to provide power for two Disney Theme Parks.

Currently, Disney wants to get rid of 50% of their net emissions by 2020 using renewable energy. Currently the new Solar Facility at Disney World reduces the annual greenhouse gas emissions by more than 52,000 metric tons!

Disney is taking the initiative to reduce big carbon companies, What are you doing to reduce your carbon footprint?

Our Partners and Allies